MEET THE MASTER PUPPETEER
Prior to that his work with puppets was confined to the hand variety which wasn't nearly as satisfying as string puppets proved to be. At the onset of his second year with "Nicolo Marionettes" he came to the conclusion that it was important for him, in his position, to have more firsthand knowledge in regards to the construction of marionettes. To him, the second and thirdhand information that he possessed, wasn't adequate to honestly answer the multitude of questions posed by the curious throughout the tour. It was at that time that he began to build his first professionally crafted marionette and therein most of the answer would be found. And now as he says, "once you construct one , you can construct many". With that experiential knowledge and that which he gleaned from Clown College, (he is a '73 graduate) and a myriad of additional allied experiences, he decided to go out on his own. In the fall of 1980 he conjured up enough gumption to start Dan Grady Productions.

In the beginning of Dan's newly formed, sole proprietorship, he took to the road with his very successful "Vaudeville Lives". That show was comprised of many short pieces that he pulled from his vast array of talents: clowning, prestidigitating, juggling, storytelling, puppeteering, singing and the like. It was a solo variety show that had some great bits, and was very well received. Initially, there were a mere two marionettes in "Vaudeville Lives" along with two hand puppets. It wasn't long before it was apparent that he should create another production that had the same basic elements but different material, and the production "Bits 'n Pieces" was made ready to commence touring to his already established client base. Additional passings of the calendar necessitated developing a third show for the road, "A Smatter of Acts". All three shows were concocted with their own marionettes and variety routines, though all were similar in nature. His public, regardless of age, became more and more entranced with the marionettes than the balance of the shows' substance. It was only a matter of time before the rest of the variety acts were tossed aside and the best of the marionettes were assembled together forming the production presently known as "Dan Grady's Marvelous Marionette Medley".

Over the years Dan wrote songs for specific characters and routines. He solicited the aide of professional artist to record the fruits of his pen. Many of those catchy ditties continue to be part and parcel of the marionette routines. With the assemblage of keenly thoughtout marionette performances Dan has been elevated, by critics from the printed media, to the title of Master Puppeteer. That is quite a distinction of which Dan is proud. It's been over thirty years since Dan began his much loved sole proprietorship. His experience and command over his wooden sons and daughters allows his work to be
enjoyed and revered by all that are fortunate enough to catch the show.

Dan Grady, at 68 years of age, is having the time of his life traipsing across the countryside exhibiting his talent as marionette manipulator/puppeteer. His career with puppets began in 1975 upon his securing a spot in the employment of the University of New Hampshire's touring children's theatre "The Little Red Wagon". He worked with that touring program for a number of seasons during which opportunity knocked, luring Dan to join the ranks of puppeteers working for the national touring, and New York based, Nicolo Marionettes (now known as "Puppet Works"). That job with "Nicolo" was the seed that cultivated his love for performing with marionettes. 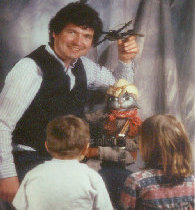